The North London Waste Authority (NLWA) and its constituent boroughs already have a strong record of partnership working and a clearly defined set of strategies created in partnership, which guide how we work and the decisions we make.

The North London Joint Waste Strategy (NLJWS) provides the strategic framework for municipal waste management in north London for the period 2004 to 2020. The NLJWS sets out the targets for reducing, reusing and recovering a greater proportion of the municipal waste generated in the NLWA area and for reducing the amount which is sent for disposal to landfill.

The NLJWS sets out how waste will be managed in line with the waste hierarchy. 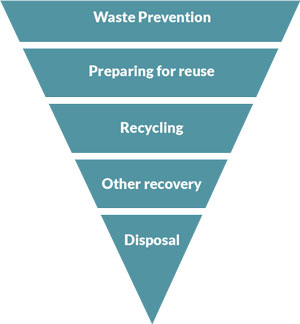 Implementing the strategy involves working in partnership as local authorities and with local communities to provide the services and facilities required to make the improvements we need at the most efficient scale of operation and finance. This involves action and investment in waste minimisation, recycling and composting and recovering energy from waste.

The first draft of the NLJWS was published in 2004 (Mayor's Draft, September 2004) but was subsequently updated and subjected to a new Strategic Environmental Assessment or SEA in 2008 before final adoption.

The NLJWS completed the process of adoption by all eight partners (Barnet, Camden, Enfield, Hackney, Haringey, Islington, Waltham Forest and the NLWA) in February 2009.

The current North London Joint Waste Strategy, an eight-authority strategy (the constituent boroughs and NLWA) sets out the strategic approach to waste disposal and treatment for waste collected in the north London area for the period 2004 to 2020.

A key element of that strategy has been addressed through the achievement of a Development Consent Order for the construction and use of a replacement energy recovery facility at the Edmonton EcoPark, planned to be in place from 2025, to treat all the residual locally collected waste.

A replacement Joint Waste Strategy will be developed, but in order for us to do so, the central government approach to the circular economy and to the encouragement of recycling is essential to support enforcement. As the national policy framework is developing, the strategy will be worked up once that landscape is clearer; it is hoped that this will be over the next year, but the legislative position will be monitored.

The new Joint Waste Strategy will focus on activities to move all waste up the waste hierarchy. In the short term, a Residual Waste Reduction Plan has been agreed after consultation with constituent boroughs. This Plan forms a short-term strategic approach from NLWA, which will inform the development of the next Joint Waste Strategy.

A bite-sized version of the NLJWS was produced (June 2009) to share the vision for meeting the challenge of managing waste in north London up to 2020. The summary additionally provides an update on progress with implementing the strategy and sets out how further progress will be monitored and reviewed.

The Residual Waste Reduction Plan is NLWA’s plan to help north London residents reduce their consumption-based emissions in the face of the Climate Emergency. The Plan covers a period of two years, with the possibility of extension for a further year. It includes waste prevention activity and communications work delivered by NLWA to reduce the level of recycling contamination and increase recycling, supporting on-the-ground activity delivered by the constituent boroughs. The Plan delivers some of the activities included within borough Reduction and Recycling Plans (RRPs) required by the Mayor of the London.

The NLJWS is the joint waste strategy for the London boroughs of Barnet, Camden, Enfield, Hackney, Haringey, Islington and Waltham Forest and the NLWA (which arranges the disposal of waste collected by these seven London boroughs). It sets out how the partners will manage the waste that they collect from households and businesses in the area until 2020.

The Strategy also sets out the roles of the London boroughs (as waste collection authorities) and the NLWA (as the waste disposal authority). It also sets out how the partners will seek to reduce the amount of waste being generated, and recycle, compost, recover energy and dispose of the waste that is produced in north London between 2004 and 2020.

New legislation came into force in 2006 which requires certain strategies to be subjected to a 'Strategic Environmental Assessment' or SEA before they can be adopted. A SEA of the 2004 draft has therefore been undertaken and changes were proposed to the Strategy as a result. The SEA legislation requires public consultation to be undertaken as part of the process.

The NLJWS also makes a commitment to regular reviews and updates.

What is a Strategic Environmental Assessment (SEA)?

SEA has a number of stages:

Section 2 of the SEA scoping report outlines the stages involved in SEA and may provide a useful guide regarding the different aspects of the process.

Is the NLJWS the same as the North London Waste Plan?

No, these are two separate documents.

The website for North London Waste Plan is nlwp.net.

The NLJWS sets out 'how' waste will be managed in the same period and it relates only to the waste collected by the seven north London boroughs, which will be about a quarter of the total amount of waste considered within the North London Waste Plan.

How is my borough/local area affected?

The NLJWS sets out how all the seven north London boroughs and the NLWA will be changing the way in which waste is managed over the forthcoming years. For local areas this means more efforts to recycle and compost more waste, potentially additional local facilities and more investment in waste management across the area. Consultation will be undertaken when changes are proposed which might affect local residents.

Where do I get further information?